Well, this was one long, cold, snowy winter where I truly envied migratory animals. More than once in early March, I feared global warming was going to have the last laugh and the snow and cold temps were here to stay. Forever. Then I heard the trumpeter swans…. 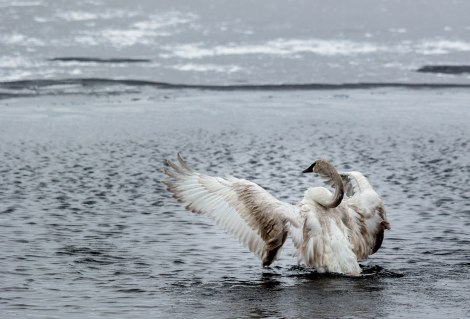 There is a patch of open water at the base of the dam across the road from us. The dam feeds a small hydro electric plant and the spill from the plant flows into a fish sanctuary. It’s always open water down there, no matter the season. The Canada geese know us well, as we are right on their migratory path. In spring, hundreds of them pass by, pass over and set down on that patch of water. Even at a distance, the sound of the trumpeter swan is unmistakable, so the second my brain processed “geese are back”, it did a rewind – no, I was betting they were swans.  And they were noisy. And there were lots of them. Such an usual sight around here. Maybe the crazy winter and late start to ‘anything-resembling-spring’ had them celebrating the great find of the open water.

By the time I hustled down there with my camera, 20 were already splashing around, and another 20 were circling to land. Most stayed for 4 days. Most likely as concerned as I was that this was the the most northern patch of open water between that dam and their final summer ground, wherever that would be. They certainly acted like it had been a while since they’d had a bath and a good feed.

Now 7 days later I can still hear a few, but I’m staying away. Hopefully a breeding pair will decide this is a good spot to raise a family and there will be a chance to photograph the cygnets.