What horse and rider doesn’t love a relaxing trail ride in the beautiful countryside?

Competitive Trail Riding is an equestrian sport that is gradually gaining notoriety in the horse world. The Tevis Cup Ride held annually covers 100 miles between Lake Tahoe to Auburn and is touted as the most challenging modern endurance ride of its kind. Annually, since 1955, the best of the best teams of horses and riders prove their fitness, tenacity, and resolve covering the rugged distance in a goal of 24 hours.

So how do you get to the point where you and your horse are trained and qualified to ride it?

Line up for vetting 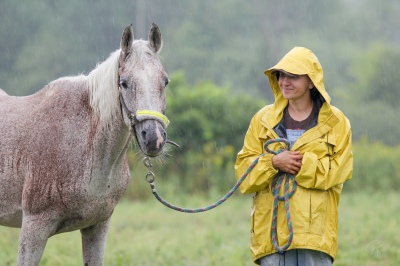 Vetting in the rain

It’s a long road. And it starts here. The Ontario Competitive Trail Riding Association (OCTRA) is one of many active organized groups of horse enthusiasts who hold regular various competitive events like the one I photographed last weekend.

Near the small town of Merrickville, Ontario, OCTRA organizers brought together a group of landowners and 37 horse-rider teams to plan and mark a 19 mile loop course (many riders did the loop twice!). It’s a fact that competent horse and rider combinations can make any equestrian sport LOOK easy. And this one is no different. Riders left smiling and returned smiling. But not surprisingly, there is a LOT that goes into this.

It starts before the rider and horse even leave home, but let’s pick up where I documented the event, from the initial arrival at base camp. Trailers stocked with horses, food, water, tack – (if you’ve ever participated in any horse competition you know the list of “stuff” is endless) arrived at a steady pace the afternoon before. Horses are looked after first – unloaded, cared for and placed in temporary, outdoor stall/paddock areas the riders bring and setup using either fixed corral panels or portable electric fencing. The registration table, porta-potties and vetting station are all set to go. Then there is the rekindling of friendships. 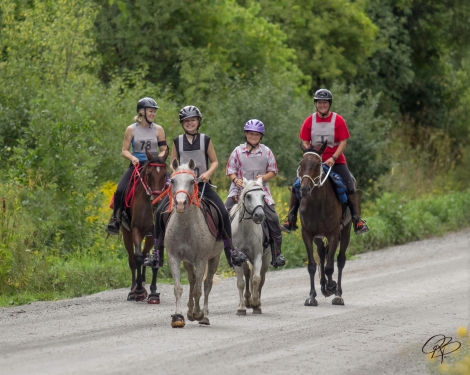 This is an intimate group of people. All different ages, sizes, genders and experience level. You immediately get the sense of ‘family’. They have all the time in the world, after all there is no against-the-clock 90-second-jump-off in this discipline. Distance riders operate on a different clock. It takes the time it takes.

In weather that alternated between overcast and torrential rain, registration was completed and the vetting began. It was set to start at 4:00 p.m. and nobody minded when they finally got around to it about 30 minutes later when horses and riders started arriving at the vetting station. No offence to any equine veterinarian I’ve ever used, but I only wish they would spend as much time examining my horses at their annual physicals as these volunteers spent going over the distance competition mounts!

No hair was left unturned. Heart, respiration, the condition of legs and backs, and every single blemish on the horses was examined and noted. Horses were trotted out, straight and in circles, and often more than once. Some horses were required to return the next morning to be rechecked, to be sure that any noted tenderness was just a temporary outcome of very wet horses with chilly backs. 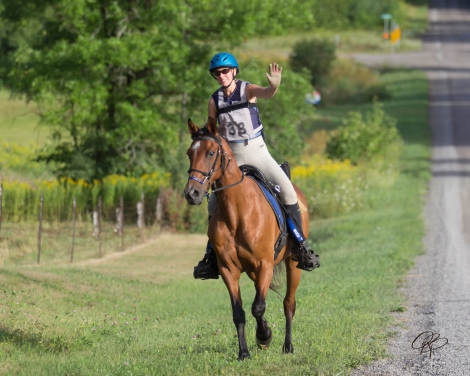 Now, to digress, I’ve ridden in horse shows in the rain, been soaked, dealt with wet horses, wet tack, wet blankets. Usually at the first sign of thunder the show is put on hold, cancelled, and everybody runs for cover. Not these competitive trail riders. They are a whole different breed. They simply acknowledged the rain and kept right on going. I guess when you spend literally thousands of hours on trails, miles away from any cover, you take a lot in stride, and you keep smiling. 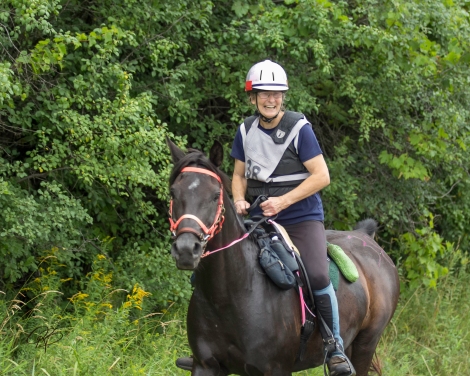 The next day, I arrived at 7:00 a.m. which was the beginning of the staggered start times. Thankfully the rain had stopped, the air was clear – not too humid – and a slight breeze. Horses, many of them Arabians – a breed that certainly excel in stamina sports – but don’t be fooled – one of the successful entries was a Percheron! – were tacked up in colourful bridles and reins, and every different type of saddle you could imagine, from western to dressage. Saddle covers (‘seat savers’) in sheepskin were common, as were specialized ergonomic stirrups, water bottles, sponges in a mesh bag, and lightweight saddle bags.

Some horses were barefoot, some were booted, some were shod, and the rest had any combination of the above. Each team, sometimes riding single, sometimes with a friend, were dispatched with a vague paper map, and the instruction “turn left at the end of the driveway and follow the markers”. The markers were dessert-sized styrofoam plates with a coloured ribbon attached and an arrow written on them, stapled periodically to fence posts and telephone poles. Some were easy to miss, but I guess that’s part of the challenge. No one got seriously lost.

To gauge my photography strategy, I asked one of the first riders out what time she expected to be back. She answered ‘In about 6 hours’. Wow. My longest equine poker run was 2 ½ hours and the last 45 minutes I was having hallucinations about drowning in Advil.

My feat, on course, was trying to figure the map and driving my car to logical locations where riders would appear, set up all my camera gear, wait for an hour or two, shoot who I could get, then pack up and go to another location. I got used to hearing “Oh look! There’s the photographer! SMILE!” when I was spotted from a distance. A local woman driving a late 1950’s(?) Mercury pick up truck, stopped and we had a grand chat. She was on her way to visit her horse and tend to an abscess that had recently blown. This was horse country.

One of my stops was the final water station ½ mile from the finish. A farm called “Rock of Faith Ranch” was hosting one of several water stations along the loop. Competitive trail horses are taught to eat and drink on command. Most of us recreational trail riders don’t like our horse to eat on the trail, but in competition it is encouraged. The owner of the ranch, Don, was out on the road keeping the volunteers company, and giving cheers to all the competitors as they came through. He was a perfect host. 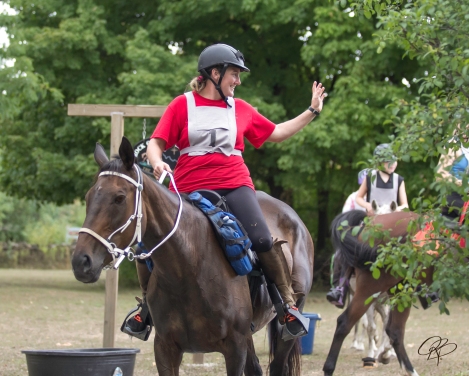 At the end of the ride – or the middle of the ride, for those doing the 19 mile loop twice – there is another vetting, and the horse sponge-down stations that were set up with military precision. Dozens of buckets of water all in rows waiting for the competitors to return. Riders waste no time, pulling off tack and tending to their horses. Although my pace was gentle, I was exhausted at the end of my 6 hours on the ‘trail’. I can only imagine the sound sleep participating horses and riders got that night. 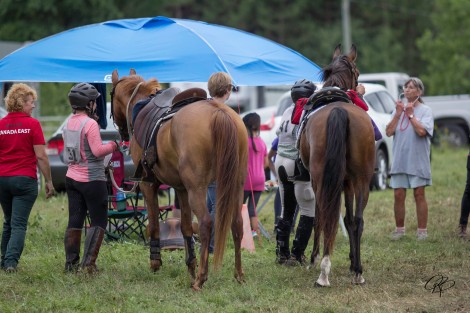 Unlike ‘traditional’ horse shows I’ve been to, I saw no blatant display of ribbons or trophies, no loudspeaker announcements of finish order or finish times. The competitive trail ride competitors will tell you: to finish is to win. Now, that’s sportsmanship coupled with horsemanship in its finest form.

I imagine they packed up and left as quietly as they arrived. Leaving nothing but a patch of flattened grass in a vacant field. Happy with their horses, with their rides, and with what the future will bring.