Well, Pan Am 2015 and my volunteer adventure is behind me. It was a marvellous experience. Not only to be part of an event this massive, but also the venue I was selected for, and hearing the Canadian national anthem, not once, but twice.

I was selected for Medals Ceremony Coordinator at the Shooting venue, north of Toronto near Innisfil. Bonus.

Not only were the hours great – medals ceremonies are rarely held early in the morning, and the sport of shooting can only be held during daylight hours – but the small, remote location at the Toronto International Trap and Skeet (TITS – the unfortunate acronym – Pan Am shortened it to “TTS”) gun club, meant I didn’t have to deal with any public transit, traffic jams or crowds.

The fact there was literally tons of ammunition on site, and I suppose, the attraction of the sport involving guns, meant that the Ontario Provincial Police (OPP) presence was at an all-time high. Some days even the volunteers had to go through 3 levels of security, including metal detection devices, and at least once, on the way OUT of the venue after shift. The OPP made up our ceremonies’ colour (flag) party and there were dozens of police watching the events and guarding the entrance. This venue was very small, so volunteers parked at the Nottawasaga Inn and were bussed in. We weren’t “permitted” to ride busses with athletes, (although sometimes we did out of sheer necessity due to transit scheduling issues) so sometimes had to wait lengths for pick up and learned to show up early for our shifts to account for shuttle delays.

The food was terrible. But always served with a smile. The weather (at least for my shifts) was timed perfectly. It was pretty standard that no sooner did we get the winning athletes off the podiums than the skies would just open up buckets. Initially volunteers were instructed to not take photos, but at my venue the local management actually encouraged it. So it didn’t take long before my Canon and 70-200mm lens made an appearance.

They are a serious bunch, these shooters. Rarely did they crack a smile. The upside is that they were never silly or giddy. I guess when you are handling something as deadly as a high powered gun, you take your job very seriously. Many didn’t “look” like athletes and often appeared on the field of play like they’d just rolled out of bed after a hard night, or crawled out of a forest somewhere in South America. They were never outdoors without shotguns cocked over their shoulders. Yes, many looked “rode hard, put away wet”. It made for some very dramatic photography. 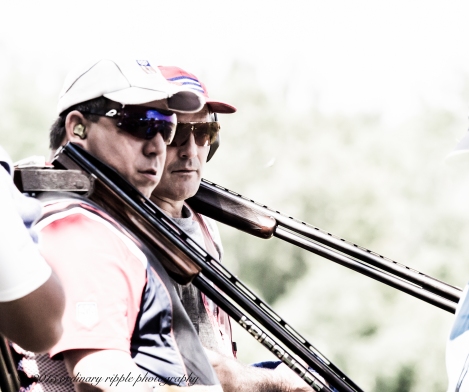 The Trap and Skeet competitions were my favourite. I collected a small bag of smashed clay pigeon parts – those that hit me, that is. Our medals tent was directly beside the field of play, and 5 feet from the range of the guns. So it was common to hear the clay pigeon parts raining down on the roof of the tent, or our heads if we happened to be standing outside.

It was ironic, that as they were shooting, I was shooting. It was great that my shots, captured their shots. One of my favourites, below, took me 5 shots before I could capture the timing of the exploding decoy.

Women make great marksmen, or markswomen. It’s one of those sports where being a woman or a man doesn’t make a difference, but regardless, the shooting competitions are split by gender.

Canada took a gold in women’s pistol during one of my shifts. Our presenter escort deviated from “eyes front” rule to enjoy the moment.

And of course a couple of team photos.

There were friendships formed that will last forever, and many, many great memories. Now for the obligatory selfie. Taken during rehearsals where I acted as the winning medalists and got to step onto the podiums. I couldn’t NOT pull my point and shoot out of my pocket when standing on Gold. 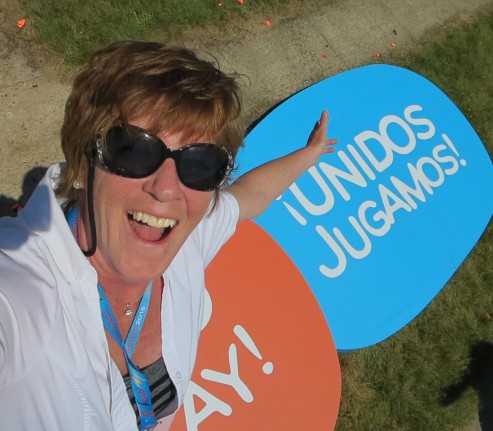